Helping you to save time and money

Using satellite technology, we can provide a measurement report and comprehensive roof quote, providing you with privacy and efficiency.

For that personal touch, Schedule an onsite visit for a roof inspection and comprehensive quote for your project.

What You Need To Know About Roof Intake Vents?

Exhaust and air intake vents are used for ventilating the steep-slope roof assemblies that offer a way to allow outside air to exit and enter ventilation and attic spaces.

The air-intake vents are utilized to allow the outside air to flow into ventilation and attic spaces. These vents are located along the lowest eave of the roof’s assembly or close to eaves or soffits. The intake vent works best when used with an exhaust vent that is positioned near or at the peak of the roof assembly. This type of configuration associated with ventilation air-intake along the low points and the exhaust at the high points benefits from natural-convection.

The more commonly utilized products include: 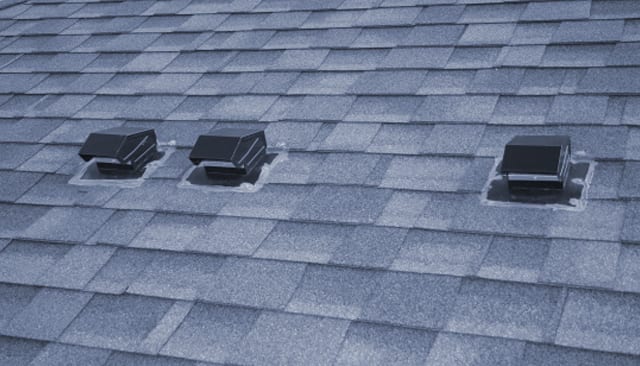 The intake vents need to be installed in order to allow for the free moving air into ventilation spaces and should never be blocked by insulation or any other materials. Baffles that are positioned between the rafters will keep the insulation from blocking the air intake. The intake vents should also be designed as well as installed to prevent insects, animals or precipitation from getting into the ventilation spaces. The drip-edge vents are not suitable for use with gutters.

The air-exhaust vents serve the purpose of allowing air in ventilation and attic spaces to escape outside. The exhaust vents need to be installed near or at the high point or ridge of the roof’s assembly.

The exhaust vents work best with an intake vent which is positioned along the lowest eaves or close to the eaves or soffits. The examples of the common types of exhaust vents include some of the following:

The ridge-vents are typically installed across the lengths of ridges. These vent types are either non-shingle over or shingle-over.

The static exhaust-vents are made up of individual vents which are usually installed close to the ridge part of the roof. An example of the static vents includes the gable-end vents which are installed into the walls associated with the building on the peak of the gable end. These gable-end vents will perform well when used with an intake vent at the eaves or soffits. This will allow for air-intake through the eaves or soffits and air-exhaust through the Gable-End vents.

When using a gable-end vent without any extra intake vents which are positioned at the low points of the roof’s assembly, the gable-end vent is able to function as both an intake as well as exhaust vent, dependent on the direction of the wind. In addition, the effectiveness of these vents will also be dependent on wind direction and speed. These vents will be more effective if the wind is traveling at a speed that is sufficient and that it comes from a perpendicular direction to the gable ends of the roof’s assembly. The effectiveness of the gable-end vent will be limited when the wind comes from a parallel direction or the wind is light.

The turbine vents require wind in order to rotate the fan blades on the turbine, which will draw the air from ventilated spaces. The design of these vents will draw the air from ventilated spaces more efficiently in comparison to static vents when there is wind present. The level of air-movement that is developed is associated with the wind speed, along with the turbine efficiency and size. Examples of turbine vents include the following:

These vents are described as exhaust fans that are roof-mounted and serve the purpose of exhausting air out of ventilated spaces. These powered vents are able to improve the movement of air and are typically positioned close to the ridge. This vent type works best with an intake vent which is located at the soffits or eaves.

The powered vents are controlled by either humidistat or thermostat switches which means the vents will only start to operate over a predetermined relative humidity or temperature. The powered ventilation is not suitable for static vents or the ridge vents. In most cases, the amount of air volume that is exhausted with powered ventilation can lead to the air intake, which means that moisture infiltration is a possibility through static vents or ridge vents.